What does it cost to live at Anthem Lakes?

The residency fee varies according to your unique situation, and it is comprised of three parts:

Below are some examples of the costs of living at Anthem Lakes based on individual preferences and circumstances. Your circumstances (or that of your loved one) will be unique and tailored to suit that individual lifestyle.

*The costs shown in these examples are illustrative. Your costs for a similar apartment will vary depending on your needs and preferences.

If you need more detailed pricing information after reviewing the costs below, call (904) 513-2899 or click here.

Dorothy and John moved to Atlantic Beach from Pennsylvania 30 years ago. Once they retired, a lively Jack Russell Terrier pup named Pepper became their constant companion. When John had a series of TIAs, they started to rethink their “forever home.” Dorothy and John loved their home full of memories of the life they shared, but ongoing maintenance and a steep flight of steps unkind to his sense of balance — and her arthritic knees — made the home less than ideal.

When their closest friends and next door neighbors Cynthia and Bill moved to Tampa to be close to their daughter, Dorothy realized they really didn’t know any of the other people who lived on the street. Having no close relatives, she and Bill decided the time was right for a more convenient home with less upkeep.

One day they saw an advertisement for an open house at Anthem Lakes and elected to take a look. John was taken by the lakeside property and loved the idea of all-inclusive maintenance and services; Dorothy was pleasantly pleased to discover she wouldn’t have to cook and clean all the time; but both of them really were sold when Pepper spied the community dog park and made himself a new canine friend.

Bob, who was career military, married late in life. He and his wife Nancy, who suffered from MS, had two children, both of whom proudly joined the service and do not live close by. They managed to save a small nest egg over the years, but significant costs for Nancy’s care during the last years of her life eroded Bob’s remaining cushion. Bob’s health has declined slowly ever since, and his neighbors urged him to look into senior living options while he could still make good decisions on his own. But, time slipped by, inertia took over, and Bob remained at home until a sudden fall landed him in the hospital for hip surgery.

When the hospital shared that it was time to discharge him but that it was not safe for Bob to return home alone, his son and daughter had little time to explore options for their father’s residency and care. They did not feel comfortable hiring unknown strangers to care for him alone in his home since they could not be present to manage that care. In addition, they had limited funds and sought a situation that could work with Bob’s veteran benefits.

Anthem Lakes was one of the communities that the hospital discharge planner suggested the family visit. They were worried that the community might be out of reach financially, however, when they discovered that Bob might qualify for veteran benefits, they selected a companion studio that suited their dad –and his wallet– perfectly.

Ken and Mary had been married approximately 50 years when things began to change for Mary, who loved to cook. She started to have difficulty operating the stove, so Ken took over the cooking. A few months later, Mary became confused by the settings on the washer and dryer, and Ken added laundry to his weekly chores. Soon thereafter, she left for a quick trip to the grocery store in the early morning, only to return close to midnight with no recollection of where she meant to go. Several trips to the family doctor and a neurologist confirmed the family’s belief that Mary had Alzheimer’s disease.

Ken continued to care for Mary in their home as the disease progressed, managing her medications and helping her to bathe and dress. However, upon Ken’s passing it was discovered that Mary wandered off regularly, and no family member had the ability to assume Mary’s around-the-clock care; all worked full-time to make ends meet and raise their families. They looked for a cost-effective solution that would offer high-quality care for Mary and peace of mind for them.

When they discovered that newly-opened Anthem Lakes offers a service-rich, flat rate memory care program in a controlled-access building, they breathed a collective sigh of relief. The care team oversees Mary’s every need, and informs the family of her status in between their visits. The monthly fee for her residency and care is predictable and manageable.

*The costs shown in these examples are illustrative; your costs for a similar apartment will vary depending on your needs and preferences. 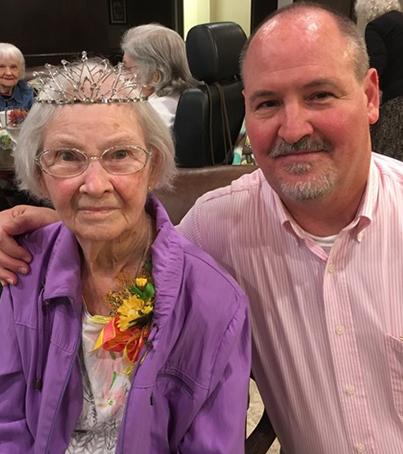